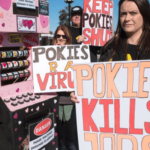 Many countries are still in lockdown phases and Australia is no exception. The lockdown periods have been initiated by the rampant spread of the coronavirus pandemic. And this has led to the shutdown of many businesses including casinos.

In South Australia, advocates are saying that reopening of pokies gaming is a huge blunder and a missed opportunity to tackle gambling addiction.

The phase three of the lockdown is allowing pubs and gaming rooms to reopen. At the same time, limiting the number of patrons inside the hotel and bars provided that they do not exceed one person per two square meters.

Nevertheless, this has triggered a small group of protestors along with reforming gambling addicts outside the Adelaide hotel.

“I think they should have kept the Pokie rooms shut,” Shonica Guy said.

“People should be spending their money in local businesses rather than wasting it at the pokies.”

Ms Guys in her earlier life lost 14 years to poker gambling and she became an addict thereafter. She highlighted that people need to support their local economy during these trying times than wasting money in gaming rooms.

The Alliance for Gambling Reform spokesperson, Tim Costello indicated that the organisation vainly asked the State Government to consider reopening of hotel gaming rooms. This was with a proposal of reduced hours and betting limits to $1.

“Poker machines were virtually gone for the last three months, which saved about $2 billion nationally in the hands of people, and you could never do that without limiting hours, or slowing the machines down,” Costello said.

“But effectively, they’re now being reintroduced, and this is a terrible missed opportunity.”

The Attorney-General Vickie Chapman indicated that the hotel industry has over 26,000 employees before COVID-19. “We need to be mindful that the industry needs to thrive to keep people in jobs.” She also gave an indication that the government has put in place safeguards for problem gamblers.

This will enable people to be barred from gambling venues immediately the moment they are sought.

“In addition, the Government has supported the rollout of Automatic Risk Monitoring, that helps gaming room staff to identify behaviour from individuals who may be at risk of gambling-related harm,” Chapman said.

Moreover, Ms Chapman also promised that the reform package would come into effect sometime this year. This is to make sure that the authorities combat problem gambling and map a way for responsible gambling in Australia.

Pokies gaming is very interesting but because we are going through tough times, it is justifiable that people are advocating for a halt on pokies gaming. Nevertheless, if you are a true fan of this gambling game surely you can place your bets online and enjoy real money betting.

You can play at the best Australian online casino today and win.

⭐ What do Pokies mean?
In Australia and NewZealand Pokie is a slot machine where gamblers place their bets and play games of chance for real money.
⭐ What percentage do Pokies payout?
Pokies payout percentage in Australia is 87%. And at some point, you will even come across games that are around 90% RTP.
⭐ Are online pokies rigged?
Online pokies are designed to make sure that the casino wins all the time. But there are also chances that the players can also place their real money bets and win.

How to Enhance your Online Betting Experience

The Impact of New Technology in the Online Casino Experience